We are Manufacturer, Supplier, Developer, Service Provider of Cylindrical Roller Bearings, Roller Bearings and our set up is situated in Kolhapur, Maharashtra, India.

In case of cylindrical roller bearings, the rollers are laterally guided by the fixed ribs of one ring.

In case of bearings with cages, the ring with ribs and the rollers retained in the cage can be drawn out from the other ring, which means that these bearings are dis-mountable Therefore, bearings from joints can be much easier mounted and dismounted, especially were interference fits are needed for both rings due to the loading condi-tions. Bearings are provided with unloaded rollers at both generatrix ends. Therefore, the linear contact between rollers and rings alters advantageously, i.e.peripheral stresses are avoided.

Single row cylindrical roller bearings are manufactured by MTK+ in various constructive versions, depending on the position of the ribs on rings. The four basic designs (NU, NJ, N and NUP) are given in the bearing tables Bearings of NU design have two fixed ribs on the outer ring and one smooth inner ring. Bearings of N design have twofixed ribs on the inner ring and one smooth outer ring. These designs allow an axial displacement in certain limits, of the shaft in relation to the housing. Therefore, these rolling bearings are used in non-locating bearing units. Bearings of NJ design have two fixed ribs on the outer ring and a fixed rib on the inner ring which can guide the shaft in a single direction (axially).Bearings of NUP design have also two fixed ribs on the outer ring and, on the inner ring, a fixed rib and a support washer. This way they can be used as locating bearings, guiding the shaft axially in both directions.For a shaft guiding in a single direction, it also can be used a bearing of NLJ design which is combined with a support washer. Thus, the constructive version NUJ is obtained Support washers on both sides of a bearing of NU design are not allowed as they lead to an axial blocking of the rollers.

These bearings provide high stiffness and maximum load carrying capacity and are particularly used for tool holders of the machine-tools and rolling mills.

These bearings incorporate the maximum number of rollers and have a small section in relation to their width.

This provides a high load carrying capacity and allows space-saving designs to be achieved.

Cylindrical roller bearings without cage cannot be used at speeds as high as those with cages. These bearings are manufactured with single or more row rollers and suffix V is added to the bearing designation. The most utilized bearings are those of series NCF29 V, NCF30 V and NJ23VH and they are given in this catalogue on page 194.M

The main dimensions of standardized bearings given in tables are in accordance with ISO 15.

The modified contact between rollers and raceway al-lows not only peripheral stresses to be avoided but also, in case of single row roller bearings, permits an angular misalignment of the outer ring with respect to the inner ring, depending on the bearing series and load according to the table 1. 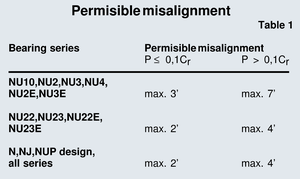 They can also be manufactured to more accurate tolerance classes and with larger (C3NA and C4NA) or smaller (C1NA and C2NA) radial clearances.

Tolerances of cylindrical roller bearings are given on pages 24. 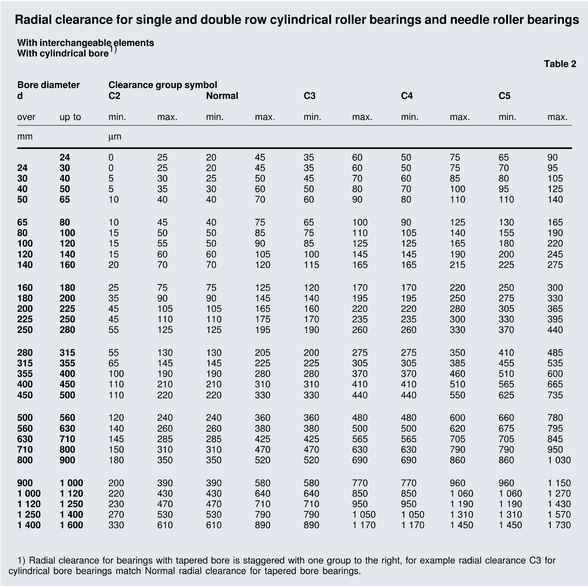 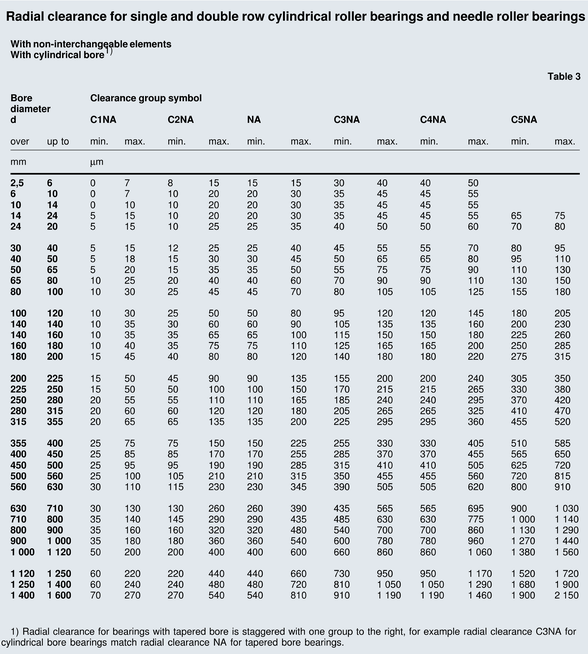 In case of heavy loads and high speeds, cages are made in one piece.

Glass fibre reinforced polyamide 6.6 cages, are suc-cessfully used for small and medium-sized bearings, if the operating temperature doesnât exceed + 120?C. These cages have low weight, low coefficient of friction and are noiseless while running.

Cage design and some technical data are given in table 4. 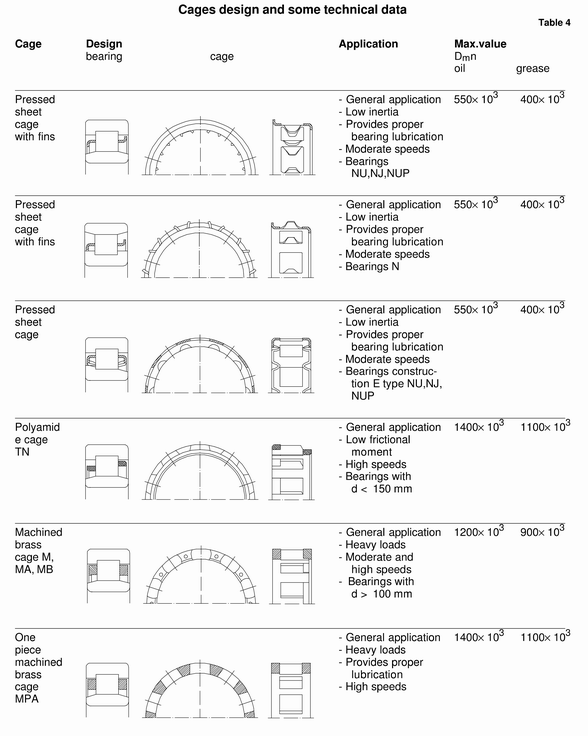 Cylindrical roller bearings must be subjected to a given minimum load, so that a proper operation of these bear-ings can be guaranteed.

This is necessary especially as the bearings are operated at high speeds and the centrifugal forces produce additional friction in bearing due to the sliding between rollers and raceway.

The values of the minimum load can be enough ac-curately calculated using the equation:

If cylindrical roller bearings have ribs on the outer and inner rings and locate shafts axially in one or both direc-tions, equivalent dynamic load can be calculated using the equations:

Cylindrical roller bearings axially loaded run satisfac-torily only if they are simultaneously radially loaded. Ratio Fa/Fr should not exceed 0,5 for bearings of E design and 0,4 for the other bearings.

Bearings with ribs on the outer ring can accommodate axial loads in addition to radial loads. The axial load carrying capacity of cylindrical roller bearings do not depend essentially on the steel fatigue strength, but on the resistance of the sliding surfaces at the roller end and rib contact and therefore on lubrication, operating temperature and bearing thermal conductivity.

Considering the above mentioned, axial load carrying capacity of a cylindrical roller bearing can be enough accurately calculated using the following equation: 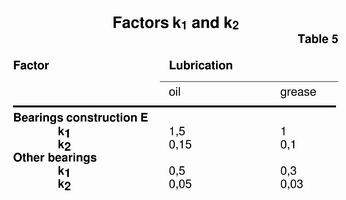 The above equation is based on conditions which are considered typical for normal bearing operation:

a difference of 60?C between the bearing operating temperature and the ambient temperature

a specific heat loss from the bearing of 0,5 mW/mm2?C;

The viscosity ratio k is the ratio of the actual viscosity at the operating temperature to the requisite viscosity for a proper lubrication at that temperature. Further details can be found in subchapter âAdjusted rating lifeâ, life adjust-ment factor a3 â on page 20.

In case of grease lubrication, the base oil viscosity of the grease should be used. These effects can be reduced at low speeds by using oils with EP additives.

The values of permissible axial load Fa max obtained from the equation above mentioned are valid for a con-tinuously acting constant axial load. If axial loads act only for short periods, the values may be multiplied by 2 or for shock loads by 3.

In case of heavy axial loads (Fa > D2 ), the ribs of the outer and inner ring respectively are recommended to be supported by the bearing adjoint parts. Bearings of NUP and NJ+HJ designs which take axial loads in both direc-tions are to be placed so that main axial loads should be taken by the fixed ribs, if bearing design allows.

Cylindrical roller bearings with outside diameter D > 240 mm of all series given in the catalogue are to be subjected to a heat treatment of stress relieving which allows bearings to be operated up to a temperature of +150?C.

The hardness of rings should not be less 59 HRC.

For a proper location of bearing rings on the shaft and housing shoulder respectively, shaft (housing) maximum radius ru max should be less than bearing minimum mounting chamfer rs min.

The values of the connection radii and support shoulder height are given in table 6. 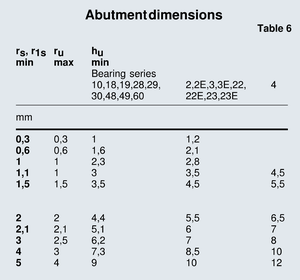 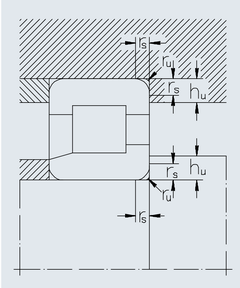 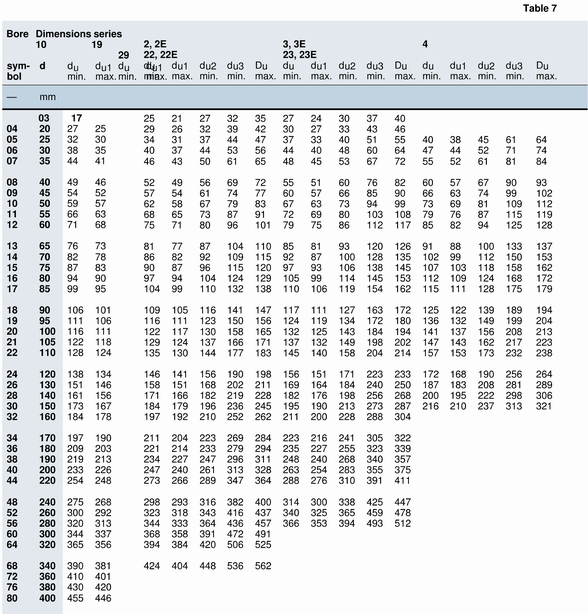 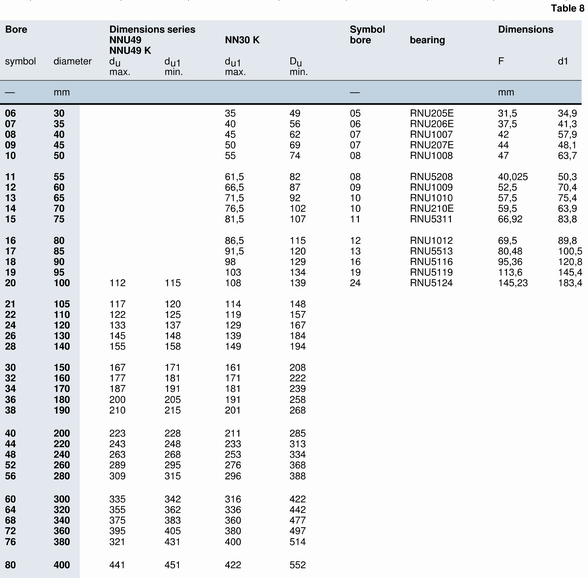